A review and outlook: The merger and vision of Manheim Express and pkwNOW

The time is almost here. The culmination of my team’s hard work in the technological fusion of two platforms driven by a shared vision.

But let’s start at the beginning of the story. When I became aware of the potential in B2B used car sales due to advancing digitalization, I decided to start a business in 2010. In doing so, I saw myself as a link between contract and used car dealers, and existing used tools. In the years that followed, the desire for a new and smart B2B trading solution grew.
The foundation for this was laid in 2015 with the market launch of pkwNOW. The platform did real pioneering work in various areas, such as digital reservation clarification or pickup tracking via smartphone. As it progressed, pkwNOW continued to develop thanks to great employees, customers, and partners, and became a permanent fixture in the B2B auction business.
But as success grew, so did responsibility. pkwNOW was now faced with the challenge of continuing to innovate and be dynamic while also maintaining the stability and consistency to ensure a successful future. The expansion of the company was therefore in focus at this time, when Sebastian Fuchs (Managing Director Manheim Europe) called me at the beginning of 2020 and asked for an open exchange. Sebastian had launched Manheim Express in Germany in the spring of 2020 and the first telephone conversation was so positive that we agreed to meet in person.

In subsequent conversations, Sebastian outlined to me the ambitious and innovative vision for Manheim Express and also introduced me to the parent company, Cox Automotive. Thanks to the company’s size, Cox offers an enormously stable economic basis, but at the same time has a deeply rooted and family-oriented foundation of values.

We talked about the potential and benefits of our two platforms, such as the use of AI (artificial intelligence) at Manheim Express and our shared vision of what it could be used for in the future. Conversely, we agreed that pkwNOW, as an established company could provide valuable expertise to ensure a fast market entry for Manheim Express.

“We had the same vision.” 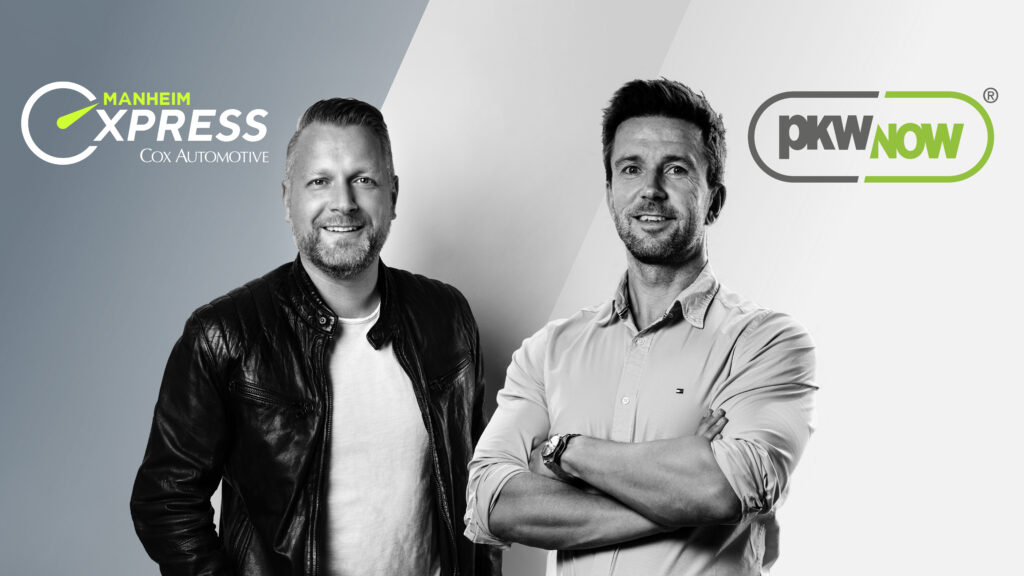 We quickly realized that a merger of both platforms would create a win-win-win situation for our customers, for Manheim Express, and for pkwNOW. Sebastian and I were in agreement – we had the same vision.
The end of the story is quickly told. Cox Automotive acquired pkwNOW in the summer of 2021. The next step was to combine the technical requirements, features, and functions. The pkwNOW platform is feature-rich but was reaching its limits. But the Manheim Express platform is only at the beginning of its technical capabilities.
We are currently in the final phase of the technological merger and by the end of this year we will be able to process all transactions via the Manheim Express platform.

This is the last step on the way to the merger and I am firmly convinced that the companies will ideally complement each other in their strengths and lay the foundations for our goals of helping to shape the future of the automotive trade, resolutely expanding the business in Central Europe, mastering all challenges together and developing new talents and innovations in the process.
But why? Because we are united by a common vision – “We are driving our future together.”

Please write to us

This website uses cookies for analytics, to display content and enable the effective operation of the site.
By clicking “Accept”, you consent to the use of ALL the cookies. However, you can find out more information about the cookies we use as well as give and withdraw consent for their use, by clicking "Cookie Settings"

This website uses cookies to improve your experience while you navigate through the website. Out of these, the cookies that are categorized as necessary are stored on your browser as they are essential for the working of basic functionalities of the website. We also use third-party cookies that help us analyze and understand how you use this website. These cookies will be stored in your browser only with your consent. You also have the option to opt-out of these cookies. But opting out of some of these cookies may affect your browsing experience.
Necessary Always Enabled
Necessary cookies are absolutely essential for the website to function properly. These cookies ensure basic functionalities and security features of the website, anonymously.
Functional
Functional cookies help to perform certain functionalities like sharing the content of the website on social media platforms, collect feedbacks, and other third-party features.
Performance
Performance cookies are used to understand and analyze the key performance indexes of the website which helps in delivering a better user experience for the visitors.
Analytics
Analytical cookies are used to understand how visitors interact with the website. These cookies help provide information on metrics the number of visitors, bounce rate, traffic source, etc.
Advertisement
Advertisement cookies are used to provide visitors with relevant ads and marketing campaigns. These cookies track visitors across websites and collect information to provide customized ads.
Others
Other uncategorized cookies are those that are being analyzed and have not been classified into a category as yet.